As soon as Mr. Cloverdale opened the door, the woman's volume dropped and she turned to him, pointing at Harry and me. We weren't afraid, just kind of stunned, and ready to laugh about some of the rabid fans of Mum and Pop's books. Mr. Cloverdale jammed his fists into his hips and glared at the big, angry, noisy woman. She quieted down and seemed to shrink about ten percent in height and width. He ushered us inside and locked the door, then told us not to mind her, Beatrice was a wonderful lady who loved books. She simply hadn't had her first pint of the day yet.

Well, that morning, her routine changed slightly, because she wanted to get Mum and Pop's newest book before she got her newspapers and pint. As she told us later, over the most incredible meal of gazpacho, goulash and chocolate soufflé, in her old age the slightest change set her off. Hormone therapy didn't help, lithium didn't help—only set routine, and her morning pint. Yes, we had dinner with her. By the end of the day, she was Auntie Bea, and we laughed a lot over our first encounter.

Bottom line: Harry and I had a blast. The coolest part of the whole adventure was seeing Mum and Pop as other people saw them. Charlie and Rainbow Zephyr were loved by both sides of the whole debate over the weird and wonderful. On one side were the cynics who lived their lives to debunk mysteries and wonders and miracles. They admired our folks for their honesty. On the other side were people who wanted desperately to believe in the weird and wonderful, in miracles and aliens, doorways to other dimensions, reincarnation and ancient astronauts. They also admired and respected Mum and Pop because they didn't mock or set out to shred whatever the extremist radicals held dear. No matter what conclusion our folks arrived at by the end of their investigation, both sides were at least happy with the rational and respectful treatment of the issue or question or mystery or theory.

Back home in Neighborlee, they were just Charlie and Rainbow. In England, they were celebrities, somewhere between priests, philosophers, and explorers. Back home, Harry and I were just the Zephyr kids. In England, we were envied and admired. Despite being Americans.
Posted by Michelle Levigne at 2:30 AM No comments:

The plan is to check in every week and tally up what I've accomplished, and add any new goals to the list. (Feel free to jeer if I don't get at least half this list done this month!) 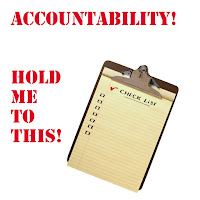 Rough Draft MAKING IT ALL UP: Match Girls Book 2:
Started

Posted by Michelle Levigne at 8:51 AM No comments:

Off the Bookshelf: MISADVENTURES OF THE LAUNDRY HAG: SKELETONS IN THE CLOSET, by Jennifer L. Hart

This is a fun, kind of snarky, kind of slapstick, kind of scary suspense story told through the eyes of an overwhelmed SEAL wife.

Maggie and her hero husband, Neil, and their two boys are settling into civilian life. Thanksgiving is coming and the demanding in-laws are not only descending on the house, but they're bringing business guests and dictating the menu and redecorating the house. Can you tell that nothing Maggie does will ever be good enough?

In the middle of this, Maggie is trying to get to know the neighbors, who all seem far too upscale for her. A new friend is trying to be helpful and somehow Maggie finds herself signed up to be the cleaning lady for their snooty hostess. Yes, she needs some extra income, but right now?

Before she knows it, Maggie is in the middle of a murder investigation, the unwitting alibi for the suspect husband. She investigates and keeps tripping over more bodies and some pretty unsavory characters -- and arrested, when she did nothing wrong. Except be in the wrong place at the wrong time. Oh yeah, and there was the time her van died and she needed to get the Thanksgiving menu shopping done, so she walked to the grocery store pushing the wheelbarrow to carry all the groceries -- and the wheelbarrow got stolen while she was in the store. And then found with a dead body in it.

Whew! This is a romp and a clever suspense tale, full of humor. And poor Maggie seems doomed to be everybody's cleaning lady -- at the behest of the police who think she might, possibly, somehow, be helpful.

Sounds like more stories are coming!
Posted by Michelle Levigne at 2:00 AM No comments:

Being Charlie and Rainbow Zephyr's kids got Harry and me into places that ordinary tourists couldn't go. Armed with cameras and digital recorders, we were official assistants. When that didn't smooth the way, the incredible luck or unbelievable coincidences that usually surrounded our folks came to our rescue. Once people got over a graying Hippie, an Asian woman with emerald or amethyst hair, a brunette teen with hazel eyes, and a husky little Latino boy being a family, they ignored the background weirdness.

Being the Zephyrs' kids got us some frustrating and slightly embarrassing moments, too. We were nearly trampled five times by fans in search of autographs. You'd think we would have learned the warning signs after the second near-death experience.

Or the time Mum and Pop had a booksigning in this cool little bookstore north of London. This huge woman at the front of the line nearly shattered glass, yelling at us, when Harry and I showed up and tried to get into the bookstore before it officially opened. The bookstore owner, Mr. Cloverdale, was a little man who Harry and I both swore had slightly pointy ears. Like some of Angela’s friends who dropped by Divine’s Emporium. He was watching for us, since we'd left the inn a good half hour after Mum and Pop that morning. He didn't see us trying to sidle through the crowd to get up to the door at first, because the crowd had grown to about forty people by then. Plus, that huge woman was right in front of the door. While the bookstore had enormous picture windows, we were hard to see because the windows were full of books on display or posters of Mum and Pop and information on the booksigning.

The big woman's voice, raised in a shout that would have stunned a dinosaur, alerted him that we had arrived. The British are supposed to be so reserved and dignified, but this woman…? Maybe she was also a soccer fanatic when she wasn't going into ecstasies about Mum and Pop's latest investigation. As soon as Mr. Cloverdale realized Harry and I were there, jammed between the locked door and the woman, he came running. The old-fashioned roll-up blind covering the door zipped up with a rattle-clatter-hum-bang and the keys chimed as he unlocked the door. I could hardly hear all that through the woman's furious lecture on the rudeness of the two of us trying to get to the head of line and sneak in ahead of people who had done the sensible thing and gotten there two hours ahead of opening time. Seriously? She was waiting there two hours? 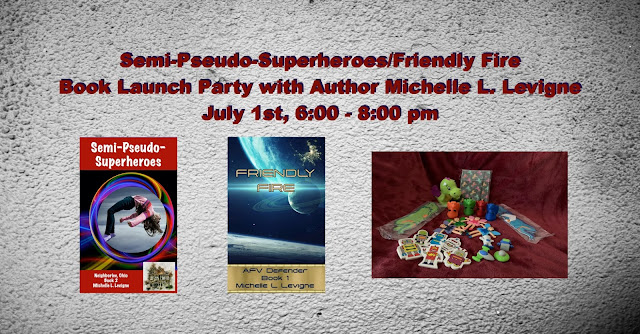 This month, I'll be posting excerpts for SEMI-PSEUDO-SUPERHEROES, which launches in paper today, and is Book 2 in the Neighborlee, Ohio series.

Both books are published by Ye Olde Dragon Books.
Check out the website for buy links and for special offers.
And please consider signing up for my newsletter, to learn about freebies and special events, and maybe even hear about new books, booksignings, cover reveals, and other fun information FIRST!

The signup form is on the right -- can't miss it!

"Is that what's …" M'kar nodded at the box clutched in the crook of her arm.

"They're intelligent. They teleport. Thyal needs one."

If I use my invalid status as an excuse to be greedy and tell you to hurry, Thyal began.

Laughter tickled through their link.

Raised voices rang off the walls of the docking arm. Dulit looked past her and he groaned.

The little drac vanished with a sub-audible pop.

"Add it to my tab." Dulit held out his hand, palm up. "Be safe, hearth-sister. Give my best to Thyal."

"Be safe yourself. Tell your captain to hurry. I'll wait for you on Le'anka." She grasped his wrist as his fingers grasped hers and they shook twice before releasing.

Off the Bookshelf: POSEIDON'S ACADEMY, by Sarah Vogler

In this fantasy world and adventure series, the Greek gods were destroyed when mortals rebelled. Their powers remained, however, and were spread throughout the world, so mortals have them now. They are labeled according to the god who had them first: Poseidons, Demeters, Sirens, etc.

Of course, there's a prophecy that they will return ...

Hailey and her friends manage to get accepted at Poseidon's Academy, an underwater school built in Poseidon's palace. For Hailey, the big attraction is that she'll be cut off from the sky, because that is the source of her power. Hailey is a Zeus, and she doesn't like being a Zeus -- and not just because the prophecy seems to expect her to mess up and bring back the gods.

Not all the mythological creatures are dead and gone, and some of them want to bring back the gods.  When some of the students break rules and go out of bounds, they run into those creatures. Hailey and her friends come close to getting expelled a few times. Then there are problems they have to deal with, coming from some of the "mean girls" at school -- who happen to have the powers of Aphrodite and the Sirens, for instance.

I'm reminded of the statement in The Incredibles: "When everyone is super, then nobody will be." That's not exactly how it works out here, but there are drawbacks to everyone having some kind of talent, with all the accompanying in-fighting and jealousy. Some powers are still better than others, and some people should never be given powers. Hailey and her friends survive their first year at Poseidon's Academy. I can only imagine what problems they'll have to deal with in their second year.
Posted by Michelle Levigne at 2:00 AM No comments: