Book of the Week: HAVE YOURSELF A FAERIE LITTLE CHRISTMAS 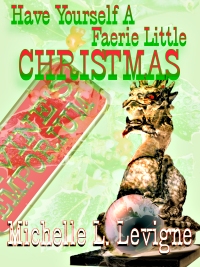 Angeloria had a highly inconvenient allergy to mistletoe and holly.

Usually, that wouldn't be much of a problem. How many months of the year did mistletoe flourish, after all?

Unfortunately, Lori's need to run away from the Fae Enclaves coincided with Christmas. The last thing she wanted was to retreat back into the shelter of the Enclave where she had grown up, because that would leave her prey to her matchmaking great-aunts and their odious choices of the perfect husband for her. Lori didn't want to get married to an Enclave wimp--someone who would keep her anchored in the Enclaves for the rest of her life. She wanted an adventurer who explored the Human world on a regular basis. Someone who thought satellite feed and a DVD collection to rival all the major studios were basic necessities of life.

If she went back to the Fae Enclaves any time in the next two months, her great-aunts would force her into dreary formal wear. Then they would drag her through a long chain of visits and teas and social functions that made Socrates' public execution sound like a jolly good time by comparison.
Besides, regular contact with the Human world provided her with a fresh, ongoing supply of dark chocolate and diet cherry cola.

If she could get out of the hotel where she had retreated to hide from the mad proliferation of holiday decorations before she sneezed herself to death, while changing colors and creating rainbow-streaked light shows for a two-yard radius.


"It's not even something a doctor could help me with," Lori explained, when her two best friends snapped their fingers and conjured up boxes of allergy medicine and calamine lotion, and settled down in her favorite suite at the Waldorf-Astoria. "It's psychosomatic. I was traumatized as a child, when Dickens had Scrooge talk about a stake of holly through the heart. I mean, I was there when he wrote it down and read it aloud and laughed at what a clever line it was." She shuddered. "You can't imagine the mental image."