Book of the Week: DIVINE KNIGHT

This continues the feature on books set in my weird little town of NEIGHBORLEE, OHIO.

Think of a place that's part Mayberry, part Roswell, part Eureka, and part Buffy's Sunnyvale -- but without the vampires or aliens.

Yeah -- MAGIC!
A little creepy at times, a lot of fun, and always something going on. For those who live there, the odd events are kind of shrugged off with a, "Ho, hum, so what ELSE is new?" attitude. And what's really odd is that newcomers don't really notice. Of course, then there's the "we don't want you here, go away" vibe that some people get, so they don't stick around long enough to notice something strange is going on.

All of this is leading up to the release of the next Neighborlee, Ohio book published by Uncial Press: DORM RATS. Otherwise known as Growing Up Neighborlee, Book 2. 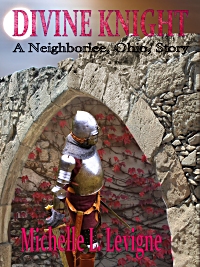 Equinox: Maurice has a day of full-size freedom to spend with his true love, Holly. Their day of fun ends in panic, when Angela is attacked and the defenses of Divine's Emporium are breached. In the search to find out who hired thieves to steal books full of inimical magic from the shop and provided them with magic charms to do it, Angela's memories are stirred. Strange dreams disturb her sleep and she asks questions she hasn't thought of in decades. Ethan Jarrod, a particularly gifted P.I. with some mysteries of his own, joins forces with local P.I. John Stanzer to identify Angela's enemies. Is Jarrod the knight from her dreams, or the final weapon of her enemies, to destroy all the magic of Divine's Emporium and Angela herself?