Book of the Week: THE SADDLE AND THE SLEUTH 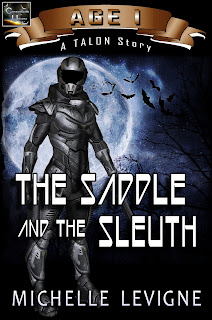 Soon after the arrival of Inspector Kreeng, Randi had bigger problems than distracting and keeping track of a bruiser-turned-dandy and his gang of powder-puff thugs. The Talon’s network of informants usually sent information in regular pulses, and she worried when rumors trickled in separately, instead of in bundles. It meant the people sending the rumors, stories and fragments of confirmed details were worried enough to bypass the routine established when her father and uncle were younger than her. Randi sent out a request for more data to the older men who acted as clearinghouses for information sent to the Talon. The request went out less than twenty minutes before Inspector Kreeng’s ship came into orbit around Rensler, so Randi didn’t have time to let Uncle Eryk know about this newest development. The welcoming dinner and formal meeting of the governor’s cabinet exhausted him. Organizing the schedule of tours for Kreeng and his assistants took up all the rest of Randi’s time, so that it was two days later before she was able to slip away to the series of caves under Government House and check her messages.

Randi cursed when she got to the last word, the worst word anyone could use or hear in these unsettled days. To call someone a Set’ri was an insult almost worthy of death.

The Set’ri were purists, dedicated to preserving the pure Human genome. The only problem was, they considered themselves intelligent and moral enough to determine what belonged in the Human genome and what didn’t. They worked through the government whenever possible to have defective genetic traits stamped out, through forced sterilization. And when the government wouldn’t cooperate, they resorted to midnight raids, killing children and sterilizing adults who had something ‘valuable to contribute to humanity, despite their defective genetics.’ Usually that meant a slave labor force.
Posted by Michelle Levigne at 5:00 AM

Labels: book of the week, excerpt, SF series, The Saddle and the Sleuth