Book of the Week: THE PIRATE AND THE PROFESSOR

This week's book is actually a novella. This week's and next week's books were once part of an anthology called Damsels OF Distress -- meaning the damsels caused the distress, rather than being in it.

For those who might be interested, PIRATE and SADDLE were based on some fun speculating based on two favorite old movies. First: What if Captain Blood had a daughter? and then: What if Zorro had a daughter? And what if their stories weren't set in the past, but on a far distance planet in the future? And so we have stories of two strong young women filling in when their heroic fathers aren't around.

THE PIRATE AND THE PROFESSOR
from Writers Exchange 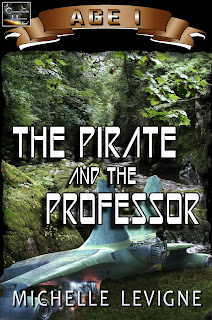 As civilization crumbles, Kiryn realizes the only way to protect her planet from pirates is to become one. She takes up the mantle of her father, a reformed pirate who saved his homeworld.

As captain of the legendary pirate ship, Nova Vendetta, she makes her homeworld a haven for the downtrodden. Then the scholarly representative of a neglected colony comes as a peace envoy and makes her think of more than just surviving. When the two of them are shot down in the badlands of her planet, they become partners to survive, then friends, then maybe something more.

Labels: book of the week, Colonies The Pirate and the Professor, Commonwealth novel