Book of the Week: BLUE FIRE

Today starts a new "feature" on the blog.

Each week, you'll get the cover art and some excerpts of one of my published books.

When a NEW book is out, the book will be featured 2 weeks, plus the weeks beforehand will be a lead-in featuring other books either from the same series, or similar. For instance, when a new romance book is released, you'll get samples from other romances. When a new Commonwealth book is released, you'll get some samples from previous Commonwealth books.

So here we go! 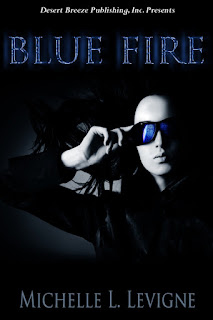 Rover captain Rhianni Day returns to Mallachrom, burdened with her father's guilt over abandoning the colony decades ago. She intends to find out the truth about the Taken, survivors of an alien invasion, leave, and never return. Mallachrom is no longer home.

Petroc Ash leads the Taken. His responsibilities to the Taken and their secrets are too great to risk, even for Rhianni. Loving her will bind her to Mallachrom forever -- and could kill her.

The quest to solve the mystery of the Talroqi invasion and protect the Taken from destruction pushes them together, shattering secrets and the barriers around their hearts. As time runs out, they take the risk of love, and become a weapon that has waited generations for completion.
Posted by Michelle Levigne at 2:00 AM