Off the Bookshelf: GEEKERELLA, by Ashley Poston

What a BLAST. A tribute to fandom. A clever rewrite/modernization of Cinderella. Elle is our heroine, living with an awful stepmother who is punishing her for her father "thoughtlessly" dying in an accident and leaving them all to fend for themselves. Catherine, the stepmother, and the awful twin stepsisters, Chloe and Calliope, just don't get it -- being nasty to Elle will not make her want to be like them. That seems to be the justification for all the nasty things her stepmother does -- she thinks Elle, the ultimate geek girl, is strange, and she's only looking out for her by destroying everything about Elle that takes after her father.  Starting with fandom and Elle's love of the old TV show, Starfield.

Starfield is given a reboot with a major motion picture, and Elle is horrified when teen heartthrob Darien is cast as the hero. Her stepsisters are delighted, and start plotting how to meet Darien and punch their ticket to fame at the very convention that Elle's father created.  Starfield was the show they both loved, and winning the cosplay contest might just be Elle's chance to make connections and escape the evil steps once and for all -- even if too-pretty Darien is there.

There's a strong element of "You've Got Mail," when Darien and Elle meet by accident via text messages. They become friends, without her knowing its him, and him not knowing her alter-ego, the blogger who loathes the casting for the movie. Elle's faerie godmother is her green-haired fashion designer go-worker at a food truck appropriately named the Magic Pumpkin. All the ingredients and "oh no, how could you?" moments from Cinderella are faithfully revised for the modern age. 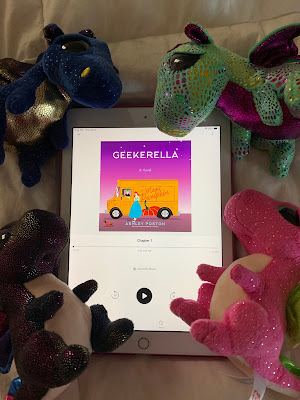