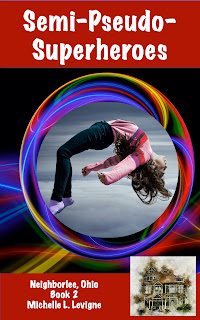 Stephanie Miller had Bethany with her when she came to open up the snack bar in the Student Center the next morning. She asked me if I would mind walking Bethany over to the theater building, to wait for Ford Longfellow, who was bringing Athena up for some experimental Kindergarten program run by the drama department. I kind of shuddered, visibly, when she said "experimental."

She laughed and assured me that nobody from the sociology and psychology departments were involved. It was all drama and playing with costumes and props and letting the children's imaginations go wild. I was glad to do it. Any excuse to spend time with Bethany. She chattered nonstop about her friends in the theater and the games they played and how she got to be a "sojer" and run around with a sword and protect the "pinsess" and the "keen." I couldn't figure out if she meant queen or king.

We reached the main entrance of the theater building just about the time the Longfellows showed up. Ford saw us, and instead of taking his truck around to the parking lot on the side, he pulled up to the steps and let Athena jump out to join us while he parked. No contest between the two five-year-olds, they were both my favorites. Getting hugs from those two little girls worked like a good strong inoculation of magic for the rest of the day.


I needed it. We all did. Not that any of us realized it when we started off on our errands that morning.
Posted by Michelle Levigne at 2:00 AM