The celebrating died down, as people ran off to get on whatever phones they could find to spread the news. We didn't have a lot of cell phones back then. The Zephyrs hurried over to where I was standing by my sled. Mrs. Z hugged me and apologized. They both laughed when I told them I knew what was going on. We climbed on the sled and screamed all the way down the hill. Mr. Z pulled the sled and the Zephyrs held my hands and we walked up the hill together. We went down twice more, and then someone flagged down Mr. Z to talk about something and Mrs. Z went to get hot chocolate for us.

Then the crimson and gold figure that had been lingering on the edge of my vision attacked. She could finally tower over me because she stood two feet up the slope.

"You think you're so smart!" Sylvia shrieked. Her fists were jammed into her hips, so it made the skirts stick out in the fancy outfit more appropriate for figure skating than sledding. "You think it's funny? Those stupid, nasty, mean people are thieves!"

Then she said other things with words I didn't understand. I had to look them up later. They were mean, derogatory, and even racially hateful. She picked on Mrs. Z for being Asian and called Mr. Z a drug-pusher and a hippie and accused them of being liars and Communist spies and dozens of other things she could only have picked up from the so-called adults in her family.

Sylvia's arsenal of nastiness did have limits. When she started in on her second round, I told her she was repeating herself. 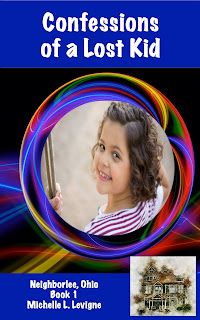 The really un-smart part of the whole encounter was that I should have turned my back on her as soon as she called the Zephyrs stupid. I mean, I had a sled right there and I was on the hill. I could have just turned and sat down and pushed. By the time she realized I wasn't listening, I would have been twenty feet away.

"That is enough, young lady," Miss Underwood said, in that tone that was so calm and disappointed, it was scary.

Most Kindergarteners would have stopped short, frozen by guilt, knowing we had made our teacher unhappy.

Sylvia let out a shriek and launched herself at me. Miss Underwood caught her by the collar of her coat. Sylvia had strong legs and a hard push-off, and enough momentum to unbalance them both and send them into the snow.
Posted by Michelle Levigne at 5:00 AM