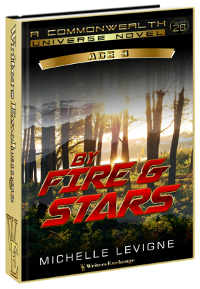 Vidan was again reaching out to the stars: sadder and wiser... and cautious, unwilling to repeat the mistakes of the ancestors. The Commonwealth was born, reaching out to lost colonies and establishing new ones, rediscovering lost technology and how to navigate the star-ways. Many of the lost colonies not only survived but thrived--and they remembered their abandonment and the harsh centuries of the Downfall...

Lucas Aidan, Kay'li Fieran's childhood friend, faces the greatest fear of children born on Chorillan: Phase. His family tries to hide his condition and ease his torment during the worst part of the illness, but when tragedy strikes he flees into the wilderness. He learns to survive, guarded by Azuli and learning the secrets of the Wildlings who never returned from Phase.

When he is captured and brought back to civilization years later, he is a figure of legend, a leader for all Wildlings, and someone the corrupt government of Chorillan would do well to fear.