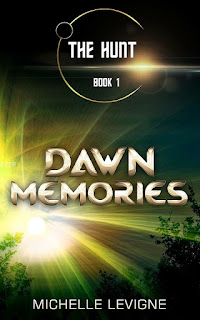 The Hunt are children sent from an endangered world in another universe/dimension of reality, to protect them from a despot who wants to command their Talents. Given into the keeping of the Hounds of Hamin, the members of the Hunt have been separated by time as well as distance. They know each other by the scars--rows of teeth marks--on their wrists. Some have been in our world for decades, others only for a few years. Before more enemies show up to destroy them, they must locate each other, soon, to find a way back home to save their world.

The explosion nearly killed her, but it also brought her back to life...

The explosion that should have killed Dawn ignites a fiery trail of buried memories, all leading to the point where it all began. She remembers...

She's not from Earth at all. She's the daughter of one of the ruling families of another world in another dimension, sent to Earth by her parents to protect her from a galactic despot who wants all the rulers' children as hostages.

She's from the Hunt, branded as such by two thin white lines on her wrist, caused by the Hounds of Hamin--interdimensional guardian beasts that hold the children's wrists in their mouths as they pull them through the vortex from their world to Earth.

But Dawn remembers something else. Someone else. Stayn, her best friend and her betrothed.

Where is he? Can he rescue her from the 'safe' house where she's currently guarded by federal agents? And can they rekindle what time and distance has torn apart?
Posted by Michelle Levigne at 5:00 AM