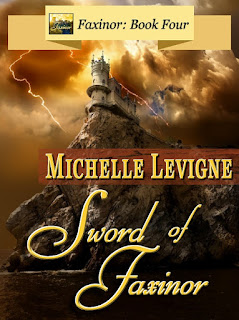 
Legend says long ago Yomnian gave to each country its own Spirit Sword, entrusted to a Sword Bearer to lead in the defense of each country, and also to provide spiritual guidance. If necessary, the Sword Bearer could overrule the word and authority of the king, but those to whom the most power and authority have been entrusted have the highest standards and the most expected of them. As the centuries passed, Sword Bearers fell and the Spirit Sword for each country was lost. Now only the country of Reshor possesses a Spirit Sword. Its bearer, Rakleer, has vanished into mist and memory, waiting until need and danger awaken the sword to choose a new Bearer and lead in the defense of Reshor.
The Faxinor family prepares to travel to Eretia for the birth of Lorien and Arand's first child. Their sea voyage is an adventure as they learn about sailing and legends of the seafarers. More than just pirates and enemy nations hide over the horizon and beyond the next wave.
A legend rises from the deep waters. Before he knows it, Derek, third-born and the oldest son, falls overboard. He's stranded on another ship, separated from his family.
Captain Silas of the Sea Storm is willing to reunite Derek with his family. However, legends, visions and the laws of the seafarers interfere.
Prophecy and visions guide the crew of the Sea Storm, and what starts out as an accident might just be the hand of Yomnian. Derek has the opportunity to recover the ancestral Faxinor sword as well as help his new friends and allies. He's reminded of the visions of his grandfather who saw all the Faxinor children spreading light throughout the world.
Posted by Michelle Levigne at 5:00 AM