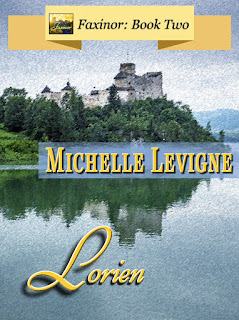 Legend says long ago Yomnian gave to each country its own Spirit Sword, entrusted to a Sword Bearer to lead in the defense of each country, and also to provide spiritual guidance. If necessary, the Sword Bearer could overrule the word and authority of the king, but those to whom the most power and authority have been entrusted have the highest standards and the most expected of them. As the centuries passed, Sword Bearers fell and the Spirit Sword for each country was lost. Now only the country of Reshor possesses a Spirit Sword. Its bearer, Rakleer, has vanished into mist and memory, waiting until need and danger awaken the sword to choose a new Bearer and lead in the defense of Reshor.

Lorien vows to do whatever it takes to serve Reshor and protect her pregnant sister, Andrixine, the Sword Bearer...even if it means making a loveless political marriage. The game of politics and courtly manners turns out to be a far harsher duty than swordplay and battle. Ambassador Lord Arand of Eretia comes to Reshor to make politically astute marriages to protect his kingdom against Sendorland. He's been ordered to win Lorien for his queen's grandson.

Arand and Lorien discover they have much in common and their resolve to put duty ahead of their own dreams soon becomes a torment. Arand has a gift for healing and music but has denied both for the sake of following family tradition and serving the throne as an ambassador.

When enemies inside Reshor conspire with Sendorland to steal first Lorien's brothers and then Andrixine's newborn sons, Lorien and Arand find themselves in the middle of danger but in exactly the right place to avert total disaster. Their own misery makes them wonder if all their sacrifices mean anything. Doesn't Yomnian want his servants to be happy?