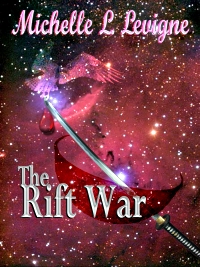 From Uncial Press
Book 5 of the Zygradon Chronicles


With star-metal, the streamers of light and the slight movements of her fingers were Emrillian's tools, rather than the forge, the anvil, the tongs, and hammer.

"Grego!" She lowered her hands. The cuff floated gently down to the granite surface of her worktable and the sphere of light surrounding her faded to nothing. She wiped sweat off her face and then wiped her hands on the seat of her loose trousers. "What a nice surprise. It's more than a moon since you visited."

"Is the armor finished?" He nodded to Mrillis as the man stepped out of the shadows at the other side of the workshop to join them at the table.

"Why?" She laughed and raked her hands through her sweat-damped hair, white and gold touched with red highlights. It had come loose of her braids in the strenuous work and the gusts of air and thrashing of the Threads, as always, and hung past her waist. Her silver-blue eyes sparkled with the euphoria of the energy she always gained while working star-metal.

"You're going to need it. I assume since you're working on bow guards, the armor is done?"

"Done, and ready for a celebration party," Mrillis said. He nodded at the cuff. "That is a gift for Shalara. I anticipate great things from her, when her imbrose is awakened."

"What's happened?" Emrillian gestured across the workshop, to the corner where a coldbox and padded benches formed a resting place amid the multiple work stations and projects in various stages of completion throughout the large, one-room building. The three settled down in their usual places for one of their long, intense, rambling talks.

"Something dire, I fear," Mrillis said. He gestured at the coldbox. The door swung open.