Book of the Week: LADY WARHAWK

Today we move on to the next book in my Arthurian fantasy series, The Zygradon Chronicles. All published by Uncial Press.

There are 5 books in the series:
ZYGRADON
BRAENLICACH
THREE DROPS OF BLOOD
LADY WARHAWK
THE RIFT WAR 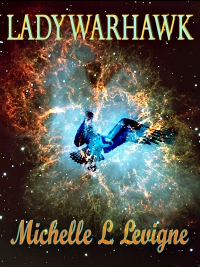 Raised in hiding, Athrar Warhawk emerges to claim his place and destiny as Warhawk's Heir. Guided by Mrillis and Meghianna, supported by his foster-brother, Lycen, Meghianna's adopted son, he tries to hold the alliance together as rebels and traitors fight for dominance. Young love turns to betrayal and loss, made worse by the political games of court and a growing schism between Noveni and Rey'kil. When Athrar finds his soul-mate, traitors and politics try to tear them apart, and magic tries to force her to betray him with Lycen. A new prophecy emerges, speaking of the Lady Warhawk, promising sorrow and hope for the future–even as the Nameless One emerges from hiding and begins his final campaign of destruction. Mrillis and Meghianna risk all to protect the defenseless thousands who have fled to Moerta, and in so doing lock the defenders in with their enemy, for all time. Only the Lady Warhawk will hold the key to the future, and to freedom.
Posted by Michelle Levigne at 2:00 AM