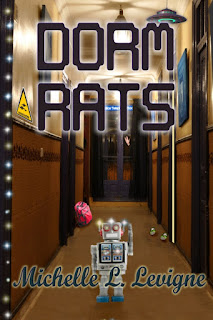 He didn't really land solid and square on the next beam, and started to fall backwards. Not a problem if this was an ordinary attic, built by sensible people, with plywood sheets stretching from one rafter to another, to provide a solid platform for storage or at least walking around. Keep in mind, Harry and I had to jump from one rafter to another because there was nothing solid between the rafters. A little bit of insulation sheeting that had needed replacing for years, maybe decades, was all that stood—or rather, lay—between Harry's backside and the thin sheet of plaster and paint that made up the ceiling of the room below us. Quite honestly, the thick layers of curdles of dust were probably sturdier than the thin junk he was about to land on.

Fortunately for Harry, his big sister had telekinetic power. Unfortunately for said big sister—moi—it isn't that easy to catch a husky nine-year-old going through a growth spurt, either with hands or with mental powers. Something gets strained either way, muscles or brain. Harry yelped. I snagged him so he metaphorically skidded to a halt in mid-air, with his bottom about three inches from the insulation. I let out a muffled yelp-argh. Sorry, but that's the only way to describe the involuntary sound that came from the sensation of a spike going through my left temple and out my right eye. Fortunately, only a temporary sensation. We froze in that position for a couple seconds until I could regain my breath while my stomach settled back into place after trying to come out my nose.

Down below, the five people with Mum and Pop all froze and looked upward at the ceiling. Mum knew exactly what had happened, because she had caught us jumping from rafter to rafter about twenty minutes before, when she came upstairs for the last crate of historical records. Don't even get me started on her fury over the deplorable state of those records, and the inability of people to understand that if they wanted documents to last for a hundred years and be usable, they needed to protect those records. As in sealing them where dust and temperature changes and insects that liked to eat paper couldn't get at them. Mum said she froze, and Pop took his cue from her, even though he didn't know what was going on. He didn't even know the delegation was there at first. He was so immersed in deciphering a document that later turned out to be over three hundred years old, he didn't hear them talking when they came in the door.