Excerpt from Chapter 15 of the fan novel now available on Wattpad:

Duncan flinched as he felt an Immortal's presence come into his range.  It would be irony, he knew, if Immerman came after him instead of trying to confront Darcy first. He found himself hoping the other Immortal had finally lost his chill sense of control and come to finish their battle now.

"In here," Darcy said.  She stepped through the door with Detective McGee in tow.  She put herself between him and Duncan for a moment, widened her eyes a little, and pressed her hand against her throat briefly.

What was she trying to tell him?

"Have to talk with you, MacLeod," McGee grated.  He hunched his shoulders, jamming his fists into his pockets.  The corners were already tearing -- a bad sign of the detective's emotional state. 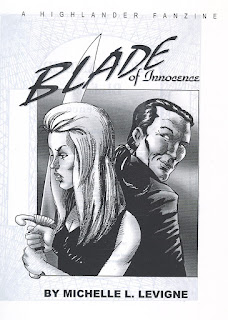 Duncan shrugged and put down the hammer.  The other workers watched him leave, then looked around at each other.  The room under renovation was quiet, not even hammers banging or saws rasping, as Duncan followed Darcy and McGee down the hallways to the center's office.

"We got an anonymous call last night," McGee said, the moment the door's latch clicked shut.  "Somebody really has it in for you, MacLeod.  This guy claimed you cut off Doc Porter's head and dumped the body out at the old glass works along the river."

"From the tone of your voice, you don't believe him?" Duncan asked after a moment.  He tried to keep his own voice neutral.

Darcy flinched as he spoke.  He stepped over and slid an arm around her shoulders.  She wasn't half as tense as he expected, but her lower lip trembled a little.

"They found Dad's body this morning," Darcy said.  She looked down at her hands.

"Somebody's out to get you, MacLeod.  I don't like it that they're killing people just to get at you," McGee said.