Today starts a NEW feature here on the blog.

On Sunday, the featured author will speak to you about a current work-in-progress or an upcoming book.

On Monday, YOU the readers get to speak to the author. She'll answer your questions about what is posted here on Sunday and Monday, or other books you've read by her, and maybe if you're good have a giveaway of some kind.


The Fifteenth Article is a futuristic, political thriller set in the late 21st century. The world slumped into a second dark age due to war, famine, and disease. Eventually, people tired of warfare, put down their arms and formed a global democracy called The Accord. However, corruption soon followed, The Accord fell and was replaced by a phony democracy called The Constitutional Government of United Earth, so named for the Fourteen Articles of Constitution. The world is divided into nineteen provinces, each province containing a primary city, the polluted areas outside the cities referred to as the outworld, inhabited by defectors, nomads, and marauders. When the book begins, Charles Devereaux, governor of Western America walks into the euthanasia chamber. His successor, Edwin Rowlands, is also slated to replace the ailing President. His climb to power will give him the votes to pass his proposed Preservation Act, or The 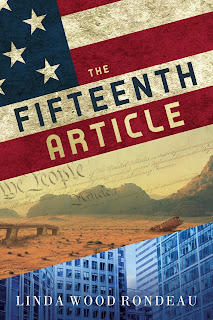 Fifteenth Article. This legislation would make defection to the outworlds, once a right under The Accord, an act of treason, both past and present, punishable by death without trial. Outworld factions in opposition to the current world government are now threatened, including the thriving Network of Western America, a system of six communities, former states, led by Jacob Goodayle, a Christ follower, who proposes secession from the Constitutional Government. General Kinnear’s Revolutionary Army proposes a military takeover. Ahmed Fared, Jacob Goodayle’s adoptive brother and Second Governor of Western America, believes reform can be managed within the existing government that would prevent civil war and a third dark age. Who will be the voice of reason within the ensuing chaos?

LATER THIS AFTERNOON, an article by Linda, discussing the background of the book. Fascinating stuff, folks!