Book of the Week: LONDON HOLIDAY

This continues the feature on books set in my weird little town of NEIGHBORLEE, OHIO.

Think of a place that's part Mayberry, part Roswell, part Eureka, and part Buffy's Sunnyvale -- but without the vampires or aliens.

Yeah -- MAGIC!
A little creepy at times, a lot of fun, and always something going on. For those who live there, the odd events are kind of shrugged off with a, "Ho, hum, so what ELSE is new?" attitude. And what's really odd is that newcomers don't really notice. Of course, then there's the "we don't want you here, go away" vibe that some people get, so they don't stick around long enough to notice something strange is going on.

All of this is leading up to the release of the next Neighborlee, Ohio book published by Uncial Press: DORM RATS. Otherwise known as Growing Up Neighborlee, Book 2. 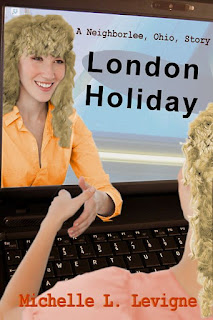 It started with an overnight stay at Divine’s Emporium and a high school computer programming assignment. Athena found an unusual video camera, hooked it up to her computer, and videotaped her cousin, London, whom everyone called Doni. She thought nothing of it, after all the other odd events of that night.
After all, Neighborlee, Ohio was the weirdness capital of the United States, and Divine’s Emporium was the caretaker, the way to control all that weirdness and keep the magic tamed. At least, that was what everyone who saw the strange things and people and events chose to believe.
Three years later, in an experimental computer class in college, Athena and her teammates chose to create a social media site as their project. The site, called FlopDrop, needed a hostess. Doni agreed to be the foundation for all the images of the hostess, whom they named London Holiday.
To the surprise of the team and the class--and the disgust of their rivals and enemies--FlopDrop took off. London Holiday and her CGI friends became overnight Internet sensations. London seemed to take on a life of her own.
By the time Athena and Doni realized that their artificial person had become a self-aware Artificial Intelligence, they weren’t quite sure what that harmless experimentation three years ago had created. Were they midwives at the birth of a new lifeform…or repeating Dr. Frankenstein’s mistakes on an even bigger scale?