Book of the Week: HERO BLUES 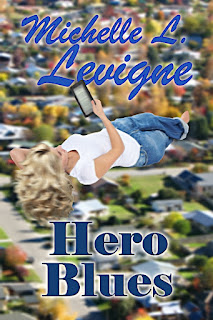 "Looks like another busy night for the Ghost," Jane muttered as she swooped down through the crystal-clear, stifling hot night air, and came in for a landing. "Goody gumdrops."

Bald tires, a road badly in need of patching, and overgrown bushes and trees hanging over the edges of the crumbling blacktop meant the McCreedy boys had to drive slowly up the steep hill and follow the hairpin turns instead of bouncing up and over. Jane appreciated their caution. She was in a bad enough mood without carrying the guilt and dismay of saving a McCreedy's life tonight. She had just painted her nails and didn't want to risk chipping them, if she had to lunge to catch a rusty bumper and keep the truck from going over the edge.

With her luck, she would get tetanus or hepatitis or any of a dozen diseases hiding in the thick coating of filth that kept the McCreedy truck from falling apart.

Unlike the other Gifted she had grown up with, Jane wasn't bullet-proof or made of steel. She could fly, she could go invisible. She could walk through solid objects and heal broken bones within a couple hours. That didn't mean she was impervious to pain or disease, and she needed a decent night's sleep even more desperately than most people. Or at least, most people in the backwards town of Fendersburg.

"Told ya it was broke," a whining McCreedy voice crowed, just before the truck crashed into the lopsided gate of the reservoir.

"Told you to get it fixed," Jane muttered, and stepped back as the truck skidded to a stop in the gravel yard of the reservoir. How many times had the Ghost made surveys of all public property, listed the necessary repairs, the accidents waiting to happen, and gave those lists to the town council? She had lost count. She had even sent the list three times to the Fendersburg Trumpet, and the newspaper actually printed the lists and demanded action. Nothing had happened.

As evidenced by the broken lock on the fence and the lack of a single spark when Willy's truck hit it open. That fence was supposed to be electrified, to stop mutants like the McCreedy boys from breaking in.

"Let's go have some fun!" Willy chortled, and slid out of the driver's seat. He reached into the back of the truck and pulled out tools for his brothers.


Most of the tools had price tags still attached. Jane sighed at that evidence that Joe-Bob over at the hardware store still hadn't repaired his burglar alarm from the last time someone broke in. She supposed she'd hear an angry tirade in the morning, about how the Ghost hadn't stopped the burglars. Honestly, how could anybody resist when the door wouldn't stay locked and Joe-Bob left the lights on half the time, so anybody walking by could see what was waiting to be stolen and no one was in the store?
Posted by Michelle Levigne at 2:00 AM