Book of the Week: DIVINE'S EMPORIUM 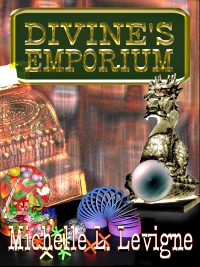 
"You must be Maurice," a woman said, and her voice came from high overhead.

Okay, he liked tall women, but this was ridiculous.

Before his neck could get a cramp from looking up and up and up, Maurice's perceptions changed, and he realized that this heart-shaped face and waterfall of hair in ten shades of gold and cinnamon weren't particularly tall. He was very, very short.

Unable to resist, he looked over his shoulder. Wings. Butterfly-shaped, glistening, iridescent, lacy, rainbow-streaked wings fluttering like the lashes of a coy maiden flirting with him, moving a little faster the longer he looked at them. Maybe if he turned around and pretended they weren't there, they would fade away. Fae hadn't had wings for thousands of years.

How could they do this to him?

"Cute, but not you," the woman said. That was laughter sparkling in her big blue eyes, and putting a rich tone in her voice, but she didn't smile. Somehow, her sympathy and attempt not to hurt his feelings just made the whole situation worse. "Especially not with those Italian shoes. I hope you won't end up with permanent holes in that sweater. Cashmere?"

He barely restrained his tongue and changed his words to something less offensive. "Who the heck cares?" Maurice had always been a quick study, and he put all the pieces together here within a few seconds, despite his head reeling from the utter indignity--five inches tall, and wings no self-respecting Fae would wear to a costume ball! "I suppose you're my probation officer?"