Before the Commonwealth, there was First Civ, and then the Downfall, an age of barbarism when the galaxy-spanning civilization shattered and colony worlds were abandoned to die or to survive by their own strength.


This is the story of Elin, a direct descendant of the first Khybor, 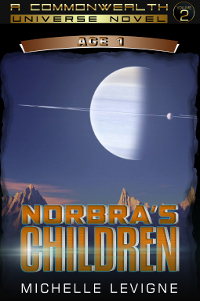 with the future of her race resting on her shoulders. When the Set'ri wanted to declare them non-Humans and have them exterminated, and other factions in civilization wanted them declared a slave race, Elin led the way to a desert world called Norbra, where Khybors had a chance to live free and to raise their children in peace and safety.

But their enemies followed them...
Posted by Michelle Levigne at 5:00 AM