There are always good reasons to pick up a book to read.

The title is intriguing.
Ditto for the cover art.
You've read other books by the author and you're willing to take the chance this one is just as good as the previous ones.
You've met the author, and you think she's a pretty cool chick.
Guilt -- someone you know is pressuring you to buy the book to support the author, and you do so just to shut them up even though it's not your taste in reading.

With Deb Kinnard's latest from Desert Breeze Publishing, PEACEWEAVER, reasons A through D apply. Besides, she's my friend, and I edited some of her early books, and I know she has the talent and style and imagination to always deliver. Always. So this one was a slam dunk.

And if you're still not convinced, then I'll gladly hit you with reason E. (But if you don't trust me, why are you reading this blog in the first place, hmm?) 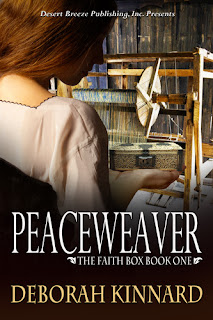 Setting: Britannia/Wales, early days of Christianity, uneasy relations between the Cymry and Saesons (I interpret this as the Celts and the Saxons) with some Viking invaders thrown into the mix to make you think making friends and joining forces is a smart move. Throw in two children of nobility, forced to marry for the sake of an alliance to strengthen both tribes. Anmair is headstrong, eager for love, and doesn't quite know where she stands in her faith. Caddall wants to be a priest, but politics and the deaths of his older brothers forced him to become the heir -- much to the disappointment of his crude, opinionated, impossible-to-please warrior father.

Anmair has a talent for weaving, but it's peace and spiritual maturity she's called upon by God to weave into her own life and the world around her -- especially when she is taken prisoner by Viking invaders.

Not going to tell you any more. Why ruin the sheer pleasure of falling into the world Deb brings up from the past, and finding out how our heroine and her hero weave their hearts and lives together? Read the book. If you've read other books set in this time period, you won't be disappointed -- this gal knows her stuff. If you've never tasted this period of history, in this particular part of the world, you're in for a treat.
Posted by Michelle Levigne at 1:10 PM No comments: